After an epic trip to Disneyland in July, my family couldn’t wait to hop a plane to Orlando to enjoy the opening weekend of Star Wars: Galaxy’s Edge in Disney’s Hollywood Studios at the end of August.

The plan was to arrive on Wednesday night late, Galaxy’s Edge grand opening day on Thursday, Magic Kingdom for the Mickey’s Not-So-Scary Halloween Party on Friday, Epcot for the Food & Wine Festival on Saturday, Animal Kingdom on Sunday with some pool time at the resort, and fly home Monday. Busy weekend with the added Labor Day weekend crowds, Star Wars fans in town for the opening, and locals pouring in for the start of the Food & Wine Festival. We were prepared for all of that but not for what else wanted to come to town… Hurricane Dorian.

Kylo Ren and a stormtrooper, I can handle. A hurricane, not so much.

Star Wars: Galaxy’s Edge in Disney’s Hollywood Studios is very similar to the land in Disneyland Park in California. We were able to enjoy the land a little easier in the massive opening day crowds by using a VIP tour guide. Those are the best! Pricey as all get out but worth it if you want to get a ton done in a day and have a larger party (up to 10 guests) that you can split the cost between. I can add these to a GototheMouse.com booked vacation package too, so keep that in mind if you’re looking for an ultimate splurge. My daughter was finally able to get more Kyber crystals for her lightsaber built in California (still no white ones though, darn Ebayers!) and I built a droid at Droid Depot. Super fun to build and customize, can’t wait to take him back in December and play with him more in Batuu. Welcome R3-A6! 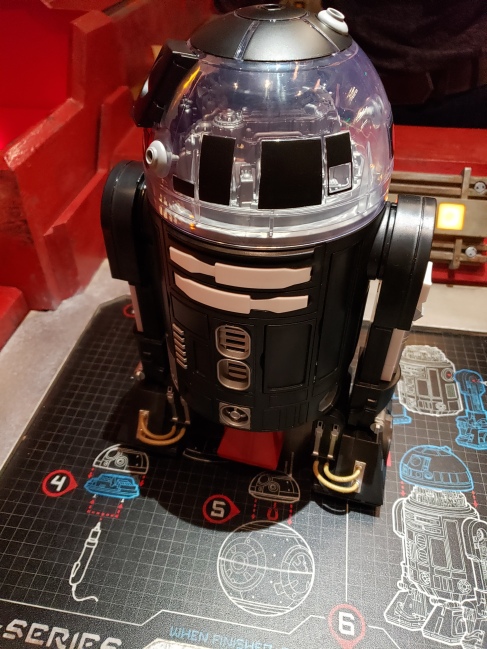 My new droid, R3-A6, working for the Resistance!

Our VIP Tour took us through Batuu and then back to Earth to enjoy Toy Story Land, some opening day merch shopping, over to Animal Kingdom for Pandora fun and lunch at Satu’li Canteen, zipping to Epcot to ride Soarin’, and then back to Hollywood Studios to finish the day with a ride on the Millennium Falcon in Batuu. The seven hours goes so fast but it’s a blast while we’re being spoiled with the guide!

The Mickey’s Not-So-Scary Halloween Party in Magic Kingdom was such a great experience this year. Disney has enhanced the ‘Boo to You’ parade with new floats and characters plus a change in the existing float order. The fireworks though were the showstopper, a complete redo on those to now feature Jack Skellington from The Nightmare Before Christmas and projections on Cinderella Castle! The show is now up to par with the nightly ‘Happily Ever After’ fireworks in the park. I would love to see those again! Lots of candy was collected, attractions enjoyed, and entertainment adored. 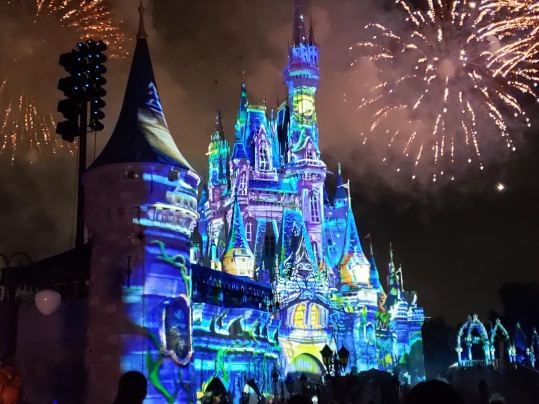 These fireworks were a blast, literally!

The Food & Wine Festival in Epcot was delish as usual. New booths and foods to try (for a fee) throughout the park. One continued complaint I have as a vegetarian is that there aren’t nearly enough vegetarian options available. Disney is starting to offer the trendy ‘plant-based’ meat products as a vegetarian option but this vegetarian doesn’t want that overly processed fake meat. Hopefully the trend is short-lived. There’s lots of construction starting in Epcot for the attractions being added and moved in the next couple of years. The park still has more than plenty to keep a family occupied though so I’m not recommending putting Epcot on the back burner for now. We enjoyed seeing the Plain White T’s in concert as a part of the Eat to the Beat concert series, LOVED it!

Disney has also enhanced the Epcot experience for kids (and the young at heart) by adding a puzzle game in the MyDisneyExperience app to dovetail with the Kidcot fun stops throughout World Showcase. Hunt for the puzzle piece, snap a pic, and then solve some puzzles to see how much you can complete toward the goal of solving them all!

The Epcot Puzzle Hunt is great for kids of all ages to use for a deeper dive into Epcot’s World Showcase countries!

We went back to Batuu a few times (had to play with my Datapad on the MyDisneyExperience app!) and into Epcot several more times. It was a breeze to get to both parks since we were staying at Disney’s Boardwalk Inn resort. Super convenient. We popped back in to Epcot early on Sunday morning for a tea tasting experience at the Rose & Crown restaurant in the United Kingdom and that was a real delight. We learned so much about the history of tea, types of tea, brewing tips, and enjoyed sandwiches and the best scones I’ve ever eaten. This was $35/guest but definitely worth every penny.

So what haven’t I mentioned… oh yeah, Dorian. That hurricane completely destroyed parts of the Northern Bahamas and everyone should consider a donation to the Red Cross to help those affected by the monstrous storm. Central Florida ultimately had basically no impact from the storm, despite days (and days) of forecasting that it could, (might, would, might not, wouldn’t) affect Orlando. We were to fly home on Monday, the forecasted day for the most impact to Orlando. The airport announced they would be closed and the fun really began. I cancelled my flight and decided we would rent a car and drive home on Sunday. The drive takes about 12 hours total but we always overnight so leaving Sunday would’ve been required. That meant cutting my trip a night short, definitely not ideal, but you do what you have to do. Then there was panic that the car rental companies were out of vehicles to rent. How crowded would the roads be? Could we get out if we tried? What about gas? When should we leave? How do we get our car parked at the airport in Virginia? And on, and on. At least I had a great travel agent on the job (that’s me!) who kept an eye on the situation, saw the forecast changing to slow the impact days to Tuesday/Wednesday, noticed that the airport had changed its mind on closing, and rebooked the flight home for our regular time on Monday. So our plans for Sunday and Monday were upended but we made the most of our newly found ‘bonus’ time and checked out as scheduled on Monday. The airport was a ghost town, so many cancelled flights and travelers that had been forced to change their plans, pure craziness. I’m all in favor of being cautious and flexible but man, Hurricane Dorian really threw everyone for a loop. Gotta love hurricane season.

We’re back home in Virginia and enjoying a couple of days of 90+ degree weather, more afternoon pool time this week. I’m not looking forward to fall, this travel mom is a summertime fan. Next month, I’ll visit Cancun for a few days so the warm weather won’t leave me for too long.