I’m only about a month late working on this blog post. Springtime definitely kicks life up into high gear around my house! In late April, the fam and I flew the friendly sky to Florida, looking some Mickey fun for Easter break. Our home base was Disney’s Coronado Springs resort, a great choice for adults or families with older kids. The resort is pretty large and spread out, so getting a preferred location room to keep you near the food court and lobby is a must to keep the walking time at a minimum. The new Gran Destino Tower at the resort will be open in July and we’re not quite sure how that will impact bus traffic from the resort to the parks or usage of the amenities. I’m hopeful that its impact will be minimum on the existing resort but, with almost 550 new rooms, I’ve got some concerns. Time will tell on that front.

Our flight into Orlando was supposed to land around 1pm but the spring thunderstorm season had other plans for us. Ultimately, we got to the resort around 5pm which put a damper on my arrival day plans at Hollywood Studios. By the time we got to the park, we had to rush to dinner, and only had time for a couple of rides before the park closed. We lucked out though and jumped in the line at Slinky Dog Dash right before closing. That kept our wait under 20 minutes and we got to ride Slinky in the dark, my fave time to ride so you can get the full effects of the lights/sounds on the attraction.

We spent the next morning at Magic Kingdom, enjoying the Marceline to Magic Kingdom tour. What a blast! This tour is great for older children and adults, preferably those who have been to Magic Kingdom at least a few times in the past and have a desire to learn more about the man behind the mouse, Walt Disney. I’m not going to spoil it for others but the backstage access you get on one part of this tour is to die for! With the age requirement at 12 years old, any backstage access is surprising as that is usually reserved for the tours that require guests to be 16 and up.

After the tour, we enjoyed the park for awhile and then hopped on the Grand Floridian resort boat to check out their annual Easter Egg display. Amazing, as always.

After the Grand, we hit the monorail to loop over to the Contemporary resort to check out their egg display. A smaller display than the Grand Floridian’s, but still quite the sight.

From the Contemporary, we monorail’d around to the Polynesian resort for dinner at ‘Ohana (FANTASTIC and oh, so much food!) and back over to the Magic Kingdom for more fun before closing. A fun nighttime ride is a jaunt on the Jungle Cruise. Just watch out for Trader Sam at the end, you know… the Head Salesman. 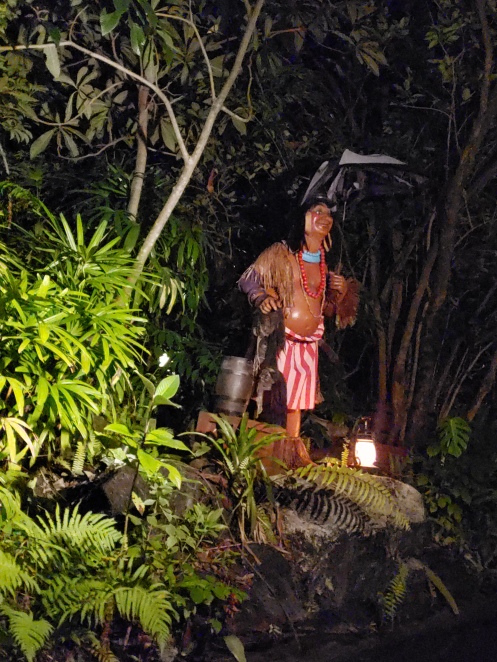 Trader Sam bidding you farewell on the Jungle Cruise

Not slowing down, Epcot was the park of the day on Sunday. The Flower and Garden Festival was in full swing, one of my favorite times of the year. We always enjoy the Egg Hunt and Spike’s Pollen Nation Exploration games (small fee to play with a small prize at the end).

These games get harder every year. So many places to hide the eggs and the little Spike figure. It takes some skill to find them all!

We found a Spike!

We finally made it into the Stave Church’s “Gods of the Vikings” display in Epcot too, that has been on my list since it opened last year. A super interesting display for those looking to learn more about Viking Gods like Thor, Odin, Loki, and Freya.

As our trip was coming to an end, we squeezed in a morning at Animal Kingdom to celebrate the park’s 21st birthday, which is also Earth Day. We couldn’t miss the celebration! The highlight of the day, and the trip in general, was meeting Joe Rohde, one of the brilliant Disney Imagineers. Joe was the lead designer on the creation of Disney’s Animal Kingdom park, Disney’s Aulani resort in Hawaii, several of the country pavilions in Epcot’s World Showcase, and so much more. A true creative genius and it was an honor to meet him. 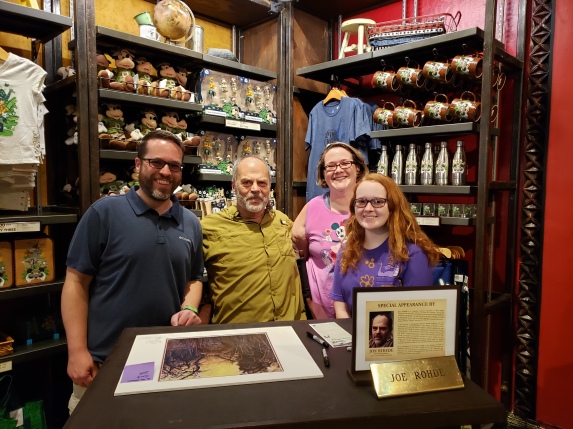 The perfect way to end our trip, meeting Joe Rohde!

After meeting Joe, we hopped on Na’vi River Journey for a quick spin and then made for the park exit. We were pleasantly surprised to run into Kevin from ‘Up!’ on the way out! 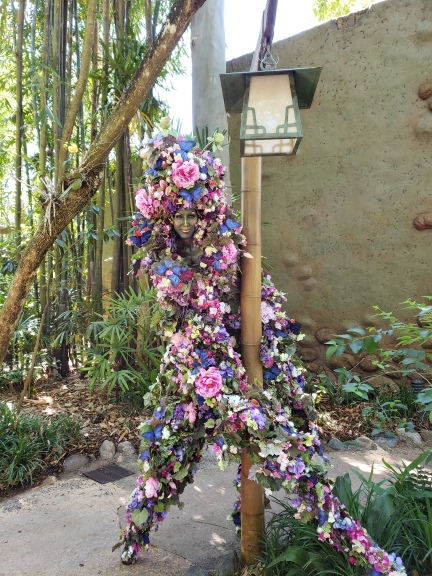 DiVine! What a talented performer!

DiVine! We haven’t seen her for years! She’s truly a talent and amazing to watch.

Stopping to meet Kevin and DiVine though really threw a kink into my already tight schedule. Then our bus back to Coronado Springs had just left before we got to the stop…  yikes! By the time we got to the resort and grabbed our luggage from Bell Services, the Magical Express bus was pulling up to take us back to the airport! We literally had a couple of minutes to spare. A LOT too tight for my liking, but the morning was worth the rush (and panic!)

I’d recap the ride back to the airport but, since I fell asleep as soon as I got into the seat, nothing for me to share on that part! We flew home on Spirit Airlines for the first (and last) time. They had the flight time we needed and at a nice price since the trip was a last minute idea, plus I had been thinking of trying them out since they are flying from some of the markets that my clients live in. Blech. Don’t need to do that again. Spirit can’t use the Resort Airline Check-in to get boarding passes and drop your check bags, so that stunk for sure. Then the check-in at the airport was a cluster, to say the least. Nobody knew what they were doing, how to line up, what needed to be done before getting to the counter, etc. Add that insanity to the holiday weekend crowds and I quickly remembered why I always say that you get what you pay for. No one was happy. Then the flight left about 30 minutes late, puny in the grand scheme of things, but you wouldn’t know it from the other passengers on the flight. You would have thought we were getting home three days late. The complaining, which wasn’t helped by the fact that there was only one agent working the gate and who wasn’t giving us any updates at all. Our gate screen said we were boarding, then boarding was closed, before the agent ever made any announcements to us. Craziness. Not the way to end an otherwise perfect vacay, that’s for sure.

So, where to next? One guess on this one is all you’ll need… Stay tuned!